Dr. David Rice, assistant professor of biology, developed the inaugural course, which he taught to biology and non-biology majors in three portions.

Part one covered a brief introduction to the science of marine biology, an overview of the chemistry and physics of the marine environment, and an exploration of the diversity and basic biology of marine fungi, algae, and invertebrates. Part two covered the basic biology and diversity of marine fish, reptiles, birds, and mammals. Part three comprised a field trip designed to sample living organisms in key marine habitats, including Humboldt Bay, Trinidad Bay, Patrick’s Point State Park, and more.

“I wanted students to tangibly experience the diversity and beauty of one small corner of God’s created order, the marine biota of coastal Northern California,” Dr. Rice said. “It is amazing to see how these creatures go about living in the places where they are found.” 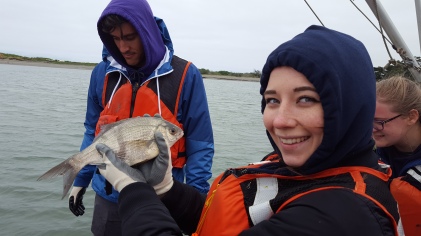 Simpson sophomore Mallory Knight, 19, of Concord, Calif., signed up to take the course as a social science major.

“I have always loved marine biology, so when I heard they were offering a lab, which is worth 4 credits, I signed up as soon as possible,” she said. The course met general education lab requirements for the five students who attended.

Simpson University faculty are encouraged to create May Term courses on special topics. Dr. Rice said he hopes to teach this course again next year.

“As a graduate student in biology, I had a particular interest in marine invertebrates and took several graduate-level courses in marine biology,” he said.

The class visited the following locations on their field trip:

–Stone Lagoon, north of Patrick’s Point, where students kayaked for a couple hours and received an interpretive lecture about the ecology and geology of the lagoon from a

–Field’s Landing, near Eureka, Calif., where students received an outdoor lecture presentation on the estuarine mud flats of Humboldt Bay, then hiked through the Humboldt Bay National Wildlife Refuge where they got to witness various species of marine birds.

–Humboldt Bay, where students took a three-hour pontoon boat excursion. They collected sediment samples and sifted through to discover various worms, crabs and bivalves. Students helped deploy and retrieve a trawl net from the pontoon boat, netting various species of fish and invertebrates.

The field trip was designed to engage students in applying hands-on methods in marine sampling and identification of marine organisms.

Knight said highlights of the course for her included rescuing the elephant seal pup and kayaking in Stone Lagoon. In addition, she said, “I learned how to tell the difference between seals and sea lions; how to properly eat crabs; that black turban snails are super fast on land; that elephant seals feel like snakes; and that Pacific Rock Crabs are really mean.”

She said she appreciates that Simpson University gives her connections with professors “that I wouldn’t have if I was in classes of 50-plus. The professors are so kind and welcoming,” she said.

At the conclusion of the course, the Humboldt State University Marine Lab offered Simpson University some of their collected specimens, Dr. Rice said.

“They gave us several species of preserved marine invertebrates and fish as well as numerous shells of different marine bivalve species,” he said. The items are archived at Simpson University’s ecology lab.

Middle video: Simpson University students get to observe and assist in setting a trawl net in Humboldt Bay.

Bottom video: Elephant seals can be seen and heard basking in the early morning sun at Old Home Beach in Trinidad, Calif.