“God’s work at Simpson has persisted for almost 100 years,” Dr. Hall told the hundreds gathered inside the James M. Grant Student Life Center for the 2 p.m. ceremony. “It is my great privilege to serve you.”

Delegates from universities worldwide, representatives from The Christian and Missionary Alliance, elected officials and community leaders joined Simpson University trustees, faculty, staff, students, alumni, and others for a ceremony that included a prayer of dedication for President Hall and his wife, Alison. 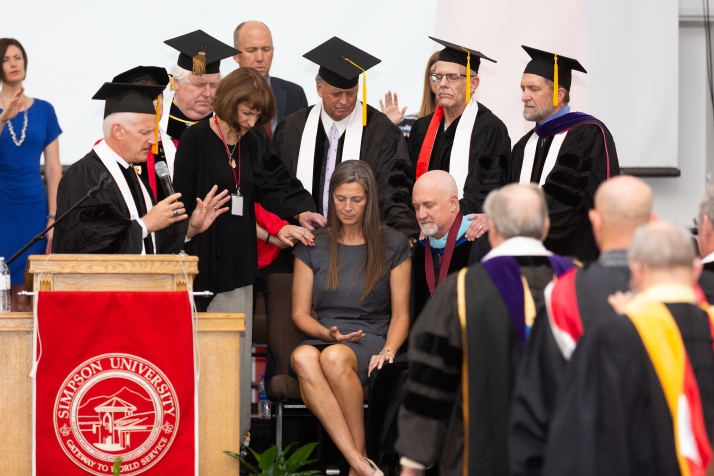 “I believe that for such as time as this, Norm Hall as the 15th president of Simpson University will lead with excellence and will find a path to God’s preferred future,” said Dr. Jon Wallace, president of Azusa Pacific University, via video. “In the 25 years I’ve known Norm, he has always given more than what was asked for, always delivered more than what was expected; he has also always been in tune to the work of the Holy Spirit in his life and in his heart.”

Whether speakers had known President Hall for years or months, they shared a strong sense of God’s hand at work in his appointment to Simpson University.

Dr. Dan Pinkston, president of the faculty, gave a welcome and thank-you on behalf of Simpson professors. “From the very first day we were impressed and encouraged by your vision, your hard work, your intelligence, and the fact that you already love Simpson and feel like you’re part of us.”

The Rev. Dr. Rick McPeak, professor emeritus of philosophy and theology at Greenville University in Illinois, where Dr. Hall worked for two decades, gave the address.

“Even though there’s lots of joy, all beginnings are hard because they’re asking us to do something greater, deeper and more profound than what we’ve been doing before,” he said. “And this is a new beginning for all of you in many ways.” 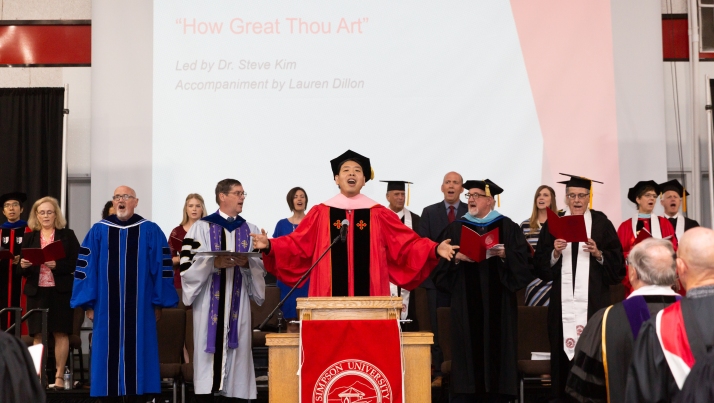 President Hall talked about the first few months of his “new beginning,” which included participating in the university’s role as a rest site, evacuation and donation center during the Carr Fire that destroyed more than 1,000 homes in late July.

“After 100 days, we have weathered some amazing storms, including a firenado,” he said. “Simpson lived out the call to be the hands and feet of Christ. It was amazing, humbling and clarifying.”

The response to the fire came in the midst of many preparations: for a new school year, an accreditation visit that took place the week of inauguration, an international recruitment initiative, a relaunch of women’s soccer, and much more.

“The real story is Simpson has gone through some challenges in recent years,” Dr. Hall said. “When I accepted the call it was clearly a call from God. I arrived here with a sober mind about the task, humbly thankful for the opportunity.”

After being here for a few days, meeting and praying with faculty, staff and students, he said, “my heart swelled with delight to be a part of this community.”

As the president and university leaders worked in those early weeks, a phrase kept running through his mind, Dr. Hall said. The phrase was “Simpson Rising.” It has become a descriptor for “what the Lord is doing here,” he noted.

He shared some notable “Simpson Rising” achievements: an increase this fall in new students, including 21 international students; three new international faculty; and a 153 percent increase in admissions inquiries over last year. The university will soon start advertising for a track and field coach.

In the past year, the university has been selected as a College of Distinction; the athletics department has been honored as an NAIA gold-level Champions of Character; the Betty M. Dean School of Nursing was ranked No. 14 in California nursing schools; the School of Education received a seven-year accreditation renewal; and the 2-year-old Veterans Success Center now serves 50 student veterans. More than 65 students participated in WorldSERVE mission trips. The university was awarded $10 million in federal grants to administer Upward Bound and GEAR UP programs in middle and high schools throughout far Northern California, impacting hundreds of young people.

“The Lord is making a new thing on our campus, and it is palpable and it is powerful,” Dr. Hall said.

During the ceremony, Simpson trustees Norm Reinhardt, Gary Friesen and James Postma introduced and offered charges to Dr Hall related to the Word of God, the Great Commission, servant leadership, academic excellence, and the university mission. 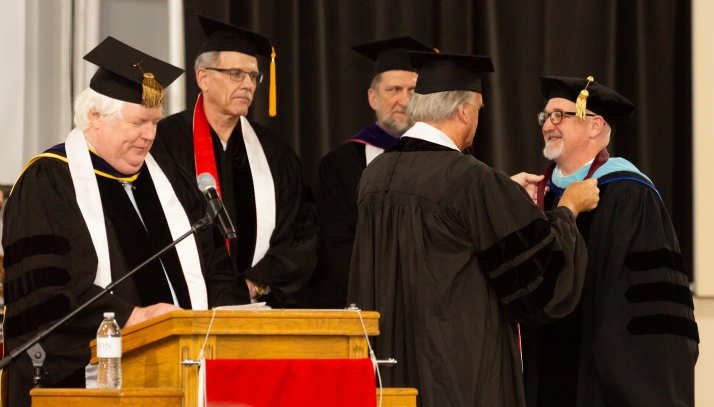 “Dr. Hall, may you lead like King Josiah,” said Dr. Friesen, referencing the young king of Judah who renewed his commitment to following God during a challenging time in his people’s history. “May you also follow him with all your heart and with all your soul, whether you have a day of unprecedented challenge or unparalleled joy… Simply put, it’s about him, not about you. It depends on God, not on you.”

Greetings were offered by Redding Mayor Kristen Schreder; Dr. Jonathan Schaeffer, board chair and vice president of The Christian and Missionary Alliance; and student body president Jacqueline Vorster, in addition to the faculty and staff presidents.

Dr. Wallace, who was unable to attend the ceremony due to illness, offered a special taped greeting. His daughter, Kate Wallace Nunneley, was present to introduce him.

Rev. Ray Van Gilst, Central Pacific District superintendent of The C&MA, led a prayer of dedication for the Halls after board member Ray Homan presented President Hall with a medallion.

Trustee Jo Anne Cripe delivered a charge to the greater Simpson community prior to Dr. Hall’s address. “The responsibility for Simpson University’s success cannot fall on Dr. Hall’s shoulders alone,” she said. “Each of us has a role to play… Together we commit to empowering Simpson to deepen its legacy as a Christ-centered learning community.”

The Simpson University Chorale, under the direction of Dr. Steve Kim, sang “The Lord Bless You and Keep You.” Other special music included an arrangement of “All Creatures of Our God and King” by Dr. Pinkston on guitar and student Mackenzie Alldrin on cello. Accompanied by the Simpson University Worship Lab band, Dr. Pinkston also played an original song titled “Look to the Hills.” The song, based on Psalm 121, has special relevance to an area where the view of surrounding hills was obscured by wildfire smoke for much of the summer.

Dr. Hall concluded his message by asking the Simpson community to “rise up.” 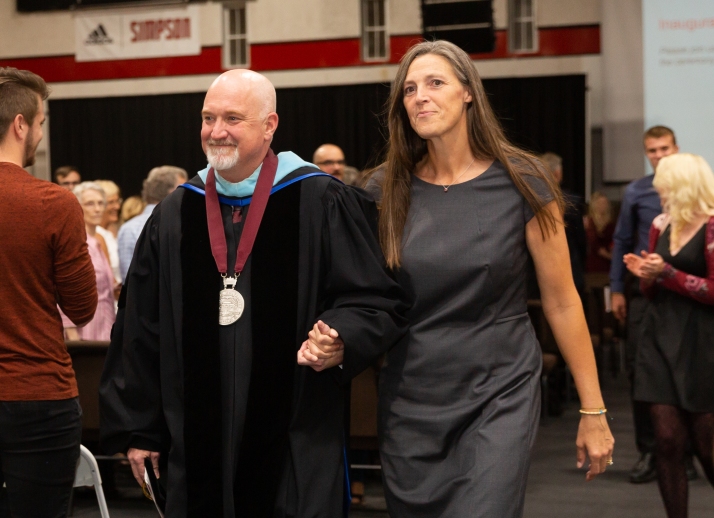 President Hall and his wife, Alison, who is from Northern Ireland, leave during the recessional.

A multilingual benediction was offered in Spanish by Angie Hurtado, academic advisor for adult studies, and in Chinese by psychology professor En-Ling Chiao.

An outdoor reception followed the ceremony. 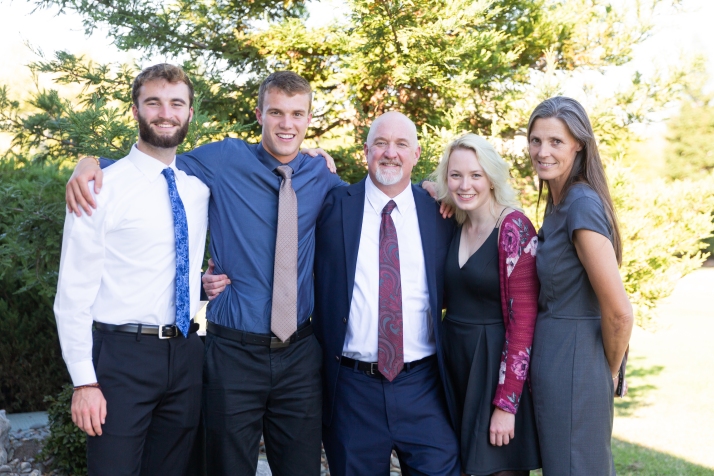 View a recording of the inauguration ceremony at simpsonu.edu/inauguration.

Simpson University, established in 1921, is a Christian university offering undergraduate, graduate, and teaching credential programs. The university will celebrate its centennial in 2021. Simpson was named as one of the 2018 Colleges of Distinction. Academic programs include ASPIRE, a degree-completion program geared toward working adults with both on-campus and online course offerings; the Betty M. Dean School of Nursing, A.W. Tozer Seminary, the School of Education, and the School of Graduate Professional Studies. For information about the university, or to arrange a campus visit, call 1-888-9-SIMPSON or visit simpsonu.edu. 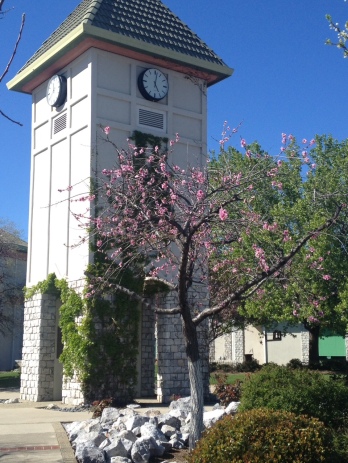 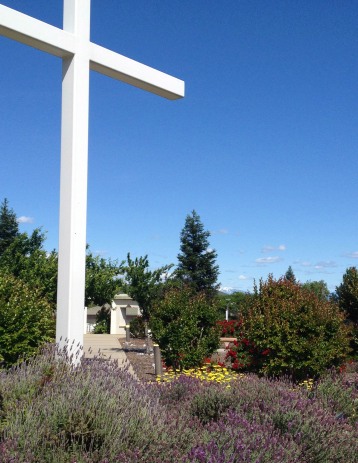